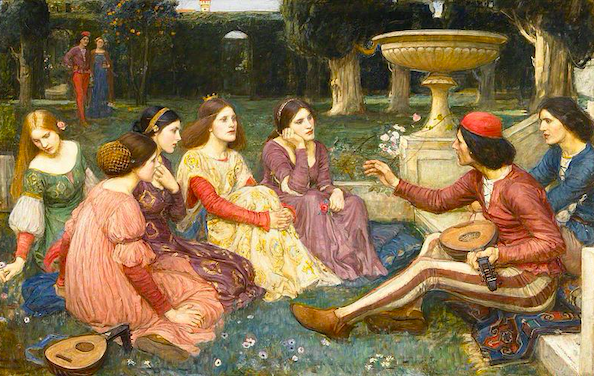 Ten stories from Giovanni Boccaccio’s masterpiece, The Decameron, read in English and Italian. Written in a time of plague, these tales still have the power to lift the spirits and comfort the soul.

Episodes will be released weekly, starting June 30, on the YouTube channel of the Italian Cultural Institute of San Francisco.

A production of the Italian Cultural Institute of San Francisco, The Daily Decameron is written, translated and presented by Steve Siegelman and edited by Enrica Cavalli with music performed by Jon Sayles.

ABOUT
Steve Siegelman is a writer based in Berkeley, California and a tiny hill town in central Italy. He has written or contributed to 38 cookbooks, including The Pizza Bible, Mourad: New Moroccan, and The Pancake Handbook. He has also written for 8 public television cooking series and co-wrote the American Masters documentary, Jacques Pépin: The Art of Craft for PBS. In a parallel life, he is a creative director for Ketchum, working on advertising and marketing for national food clients. Steve holds a B. A. in Comparative Literature with highest honors from UC Berkeley, where he wrote his honors thesis on a previously untranslated 16th-century treatise written in alternating lines of Italian and Hebrew verse.

A native of Sardinia, Enrica Cavalli is a video director, editor and producer whose San Francisco-based production company works with various organizations and companies in the Bay Area. She directed and edited the film Food Makers: The Future of Nutrition for The Future Food Institute and collaborated on One Foot In: Stories of Expat Women in America. Enrica holds a Bachelor’s Degree in Cinema, Television and Multimedia Production from Ca’ Foscari/University of Venice; a Masters Degree in Digital Audio and Video Editing from La Sapienza University of Rome; and a Masters Degree in Digital Marketing & Social Media strategy.