In memory of Luisa Adorno and Erasmo Recami, former Presidents of the Friends of Leonardo Sciascia 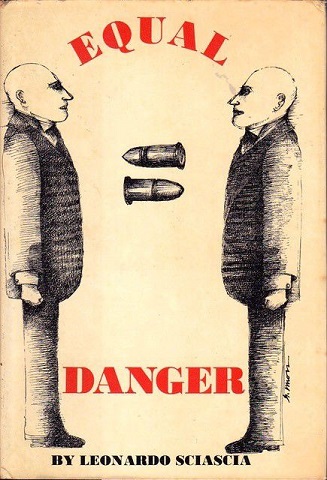 The Sciascia Lectures at San Francisco belongs to the calendar of Sciascian Lectures in the world. It is promoted by the National Committee for the Centenary of Sciascia, chaired by Senator Emma Bonino, and by the Amici di Leonardo Sciascia Association, in collaboration with the Università per Stranieri di Perugia and the Institute for the Italian Encyclopedia Treccani, under the patronage of the MAECI (Italian Ministry of Foreign Affairs and International Cooperation). The program also benefits from the support of various Italian Cultural Institutes around the world.

In San Francisco, the lecture will be introduced by Annamaria Di Giorgio, Director of the Italian Cultural Institute of San Francisco and moderated by Valerio Cappozzo, President of the Amici di Leonardo Sciascia Association and member of the National Committee of the Sciasciano Centenary. It will focus on Leonardo Sciascia’s relationship with North American culture, the reception of his works across the Atlantic, and his exchanges with US intellectuals. The meeting will host Giulia Pellizzato (Harvard University) and Eloisa Morra (University of Toronto) and it will be held in English.

From The Council of Egypt to The Mystery of Majorana, works by Leonardo Sciascia have been framed as a meditation on justice, ethics, power, and responsibility. Through translations, paratexts, and critical reception, we will look at the echo some of these works produced in the United States, a land at the center of the author’s attention.

Turning narration into ethical inquiry, Sciascia invites us to reflect on what is “human reason” (as he defines his article of faith in Le parrocchie di Regalpetra), and what are the consequences and implications of technical might.

The Sciascia-Jackson Archive of the University of Toronto: genesis and research perspectives
by Eloisa Morra (Toronto University)

The Department of Italian Studies of the University of Toronto acquired a vast amount of materials (reviews, journal articles, art catalogues, interviews) donated by the late Prof. Giovanna Jackson, one of the first Sciascia scholars in North America. The materials had been donated by Sciascia himself shortly before his death. The aim of my talk is twofold: 1) outlining the genesis of the donation by analyzing Jackson’s letters to Sciascia between 1974 and 1988; 2) tracing new research perspectives opened by the collection, which revealed to be a crucial tool in detecting the sources of Sciascia’s documentary fiction as well as the multimedia reception of his work.

Valerio Cappozzo is Associate Professor and Director of the Italian Program at the University of Mississippi, president of the Associazione Amici di Leonardo Sciascia, co-Editor-in-Chief of Annali d’Italianistica, member of the MLA Forum Executive Committee (LLC Medieval and Renaissance Italian), member of the Executive Committee of the Comitato Nazionale Leonardo Sciascia, member of the Scientific Committee of the Fondazione Giorgio Bassani, and Vice-president of the American Boccaccio Association. With a specialization in literary criticism and material philology, he works primarily on medieval literature and on modern and contemporary poetry. His most recent books are, Dizionario dei sogni nel Medioevo. Il Somniale Danielis in manoscritti letterari (Leo S. Olschki, 2018), and the edited book Dal particolare all’universale. I libri di poesia di Giorgio Bassani (Giorgio Pozzi Editore, 2020).

Giulia Pellizzato is conducting research at Harvard as a Postdoctoral Fellow of the project “Transatlantic Transfers: The Italian Presence in Post-War America,” funded by the Italian Ministry of Education, University and Research. Before coming to Harvard, she was a Postdoctoral Fellow in the Italian Department at Brown University, thanks to a postdoctoral grant funded by the Swiss National Science Foundation: An Adventure Overseas, Almost a “Renaissance.” Italian fiction in the United States after World War Two. She obtained her PhD in Italian Studies from Università della Svizzera italiana in December 2018. Her research interests include 20th and 19th-century Italian literature, the transatlantic circulation of literary works and ideas, translation studies, and the pedagogy of literature. Her published research includes studies on translation practices, women in publishing, archives of the twentieth century, and authors including Goffredo Parise, Giuseppe Prezzolini, Jolanda Insana, Ippolito Nievo. Her first book, Prezzolini e Parise: un’amicizia transoceanica, was published by Leo S. Olschki in 2021.

Eloisa Morra‘s publications explore interdisciplinary issues at the crossroad of textual and visual studies, modernity and the Renaissance, classicism and experimentalism. She is the author of Un allegro fischiettare nelle tenebre. Ritratto di Toti Scialoja (Quodlibet 2014, Special mention Edinburgh Gadda Prize) and the editor of two volumes: Building the Canon through the Classics. Imitation and Variation in Renaissance Italy (Brill 2019) and Paesaggi di parole. Toti Scialoja e i linguaggi dell’arte (Carocci: 2019). Eloisa earned a Ph.D. in Romance Languages and Literatures from Harvard University and a B.A. and M.A. from the Scuola Normale Superiore. At Harvard she taught at the Department of Romance Languages and Literatures and co-curated a research exhibition and several projects at the Harvard Art Museums. In addition to scholarly papers and essays in English and Italian, Eloisa published literary translations and a number of articles and op-eds for national newspapers and magazines.